My husband Tyler, and his medical journey, is the inspiration for this blog.

While he is the only one in  our immediate family living with Celiac, our family and friends are all joining him in his journey of being gluten-free—whether that’s making sure he has his own stick of butter at meals (to avoid becoming ‘glutened’) or endlessly google-searching where we can go out to eat safely on a vacation.

To an extent, you—my blog readers—are too!  I pray that you can find inspiration in Tyler’s medical journey with Refractory Celiac Disease.

Are you new here? I also have the following posts to help you live gluten-free without the stress!

…get valuable support from me, and gluten-free peers, in my EXCLUSIVE Facebook community “Stress-Free Gluten-Free” by clicking here!

As a toddler, Tyler was generally healthy, but with occasional stomach aches leading his doctors to believe he was lactose intolerant.

While he was big for his age in Kindergarten, by 5th grade he became one of the smallest kids in his class.  It was around this time that he began to develop digestive issues so severe that they interfered with his ability to attend school, play sports, and more.

Throughout middle school Tyler was subjected to all different kinds of elimination diets, allergy testing, and more—but none of it worked, and Tyler was eventually hospitalized due to severe dehydration.   If this happened today, Celiac panels would (hopefully) be in the preliminary tests.  However, back in 1997 Celiac was virtually unheard of.

Back then they estimated that only about 1 in 3,000 Americans had the diagnosis of Celiac disease.  Today those estimates are much higher:  about 1 in 133.

Thankfully, one of the PAs at Tyler’s primary endlessly researched possible causes for Tyler’s condition, and began to suspect Celiac. Testing confirmed the suspicion. Gluten was immediately eliminated from Tyler’s diet and the journey of living with Celiac began.

In 1997, adopting a gluten-free diet was pretty much unheard of.  Nothing in the store was labeled “Gluten-Free.”  The Food Allergen Labeling and Consumer Protection Act (FALCPA) wasn’t even enacted until the next decade.

Tyler’s family ordered his food from specialty catalogs and in order to bake anything you would have to endlessly mix flours in an attempt to get the right consistency.  In Tyler’s memory, he gave up on having things taste good.

Yet, despite the difficulty of maintaining a gluten-free diet, his medical improvement was so drastic that no one considered the fact that issues that come with living with Celiac may have been lingering.

In 2006 (his junior year of college) Tyler’s health began to deteriorate again, leading him to move back home and finish his degree locally. Later that summer Tyler would have an additional diagnosis: Type-1 Diabetes.  While Tyler’s family was optimistic that his health would begin to improve, it continued to decline.

Shortly after Tyler and I were engaged, he was hospitalized with low potassium levels that his GI specialist began to suspect was linked to Tyler’s continued gut issues (Tyler’s potassium levels were very low, down to 1.6.  This is a really big deal—potassium helps your muscles contract/expand.  Since the heart is a muscle, there was serious fear of cardiac arrest).

Tyler’s GI began to suspect that in addition to living with Celiac, Tyler may actually have Refractory Celiac disease, and he referred us to the Celiac Center at Beth Israel Deaconess in Boston where they confirmed this diagnosis.

Soon after we were married Tyler had an appointment with one of the nutritionists at the Celiac Center, she recommended that Tyler follow a very strict diet consisting basically of only

It may have been 2012—but I felt like a pioneer!  I dehydrated herbs and made spices like paprika from scratch, just so our food could have some flavor!  Our first daughter was born fall 2013.  Tyler seemed to respond well to this diet, but in summer of 2014 he was hospitalized again for low potassium levels.

This time, his specialists put him on steroids.  While his gut-health improved slightly at the time, it didn’t last very long, and the steroids left some icky side effects.

By winter 2015 Tyler was admitted to the hospital 1-2 times a month due to metabolic acidosis (basically, not only did his potassium levels continue to drop, but he was also having problems stabilizing his magnesium, sodium bicarbonate, and other electrolytes).

They would give him some IVs until his levels would balance, but then they would drop again leading to another admittance.

In April 2015 he received another diagnosis:  Exocrine Pancreatic Insufficiency (EPI).  His specialists theorized that his pancreas wasn’t creating the digestive enzymes needed to digest food properly.

Treating the EPI helped temporarily, but the recurring hospitalizations began again in June of that year—actually, it’s a miracle Tyler wasn’t in the hospital for the birth of our second daughter (he was discharged the day before I went into labor, and he was hospitalized again when she was 2 weeks old).

By August he was being admitted almost weekly (with only 3-4 days home at a time).  That September, following Tyler’s primary doctor’s recommendation, my mother-in-law and I decided that instead of bringing him back to one of our local ERs, we would drive him down to the ER at Beth Israel Deaconess (where he saw his Celiac Specialists a few times a year).  He was admitted immediately.

Not only was Tyler admitted due to more metabolic acidosis, but Tyler had a number of other symptoms as well:

This hospital admittance wasn’t like the ones that he’d had before—they didn’t just treat his symptoms.  Tyler was hospitalized for 8 weeks as they explored a wide variety of treatment possibilities.

Eventually they settled on an immune modulator therapy consisting of mercaptopurine and Remicade infusions.  According to one of Tyler’s specialist, as far as he can tell, there are only about 4 individuals like Tyler in the United States receiving the same course of treatment [if you are also receiving similar treatment for Refractory Celiac, please contact us, we would LOVE to hear from you]!

God gave us a miracle–Tyler was discharged from Beth Israel Deaconess the Monday before Thanksgiving of 2015 and still has not been hospitalized since!

While Tyler is still living with Celiac (more specifically, with Refractory Celiac disease) and the difficulties that come with it, we happily take the extra doctor’s visits, infusions, medical expenses, and searching out the best gluten-free finds.  We also recognize that life is fragile, and each day is a gift from God.

I started The Helpful GF and am working on the education and training to become a Registered Dietitian and specializing in Celiac Disease & autoimmune care because I’m passionate about helping others and supporting them on their journeys to better health.

Whether you are living with Celiac like Tyler or are gluten-free for other reasons, I’d love to hear your gluten-free journey!  Comment below or email me at sharon {at} thehelpfulgf {dot} com.

Ready to take back control of your meals and love your gluten free life? Take the 45 second quiz to get a personalized plan with the guide you need to thrive!

This site uses Akismet to reduce spam. Learn how your comment data is processed.

I am so happy for you both that he is doing so well! My uncle had refractory celiac. We are in Canada. I know how rare it is, not to mention how frustrating the journey to diagnosis is for celiac, let alone refractory celiac. I have celiac myself and so does my son. I haven’t fully responded to the gluten free diet, so they keep eliminating more foods. My diet is now about the same as your husbands. I can relate to your pioneer feelings. I had to start growing my own foods and herbs. We grow our own meat so I know their diet, my husband butchers it so we know it is our meat for sure. We worried about mixup of meat at butcher shop. My son seems to be doing good on the gluten free diet, so I am grateful for that. Have you had your children tested yet?

I'm so happy your son is feeling well now! Our oldest daughter was tested (she has reflux) and has normal TTG levels and her genetic testing shows she's actually only 2x more likely than the national average to develop Celiac--which was kinda astounding to us! We're still watching though, and praying that they don't have to go through what their father has been through.

This site uses Akismet to reduce spam. Learn how your comment data is processed. 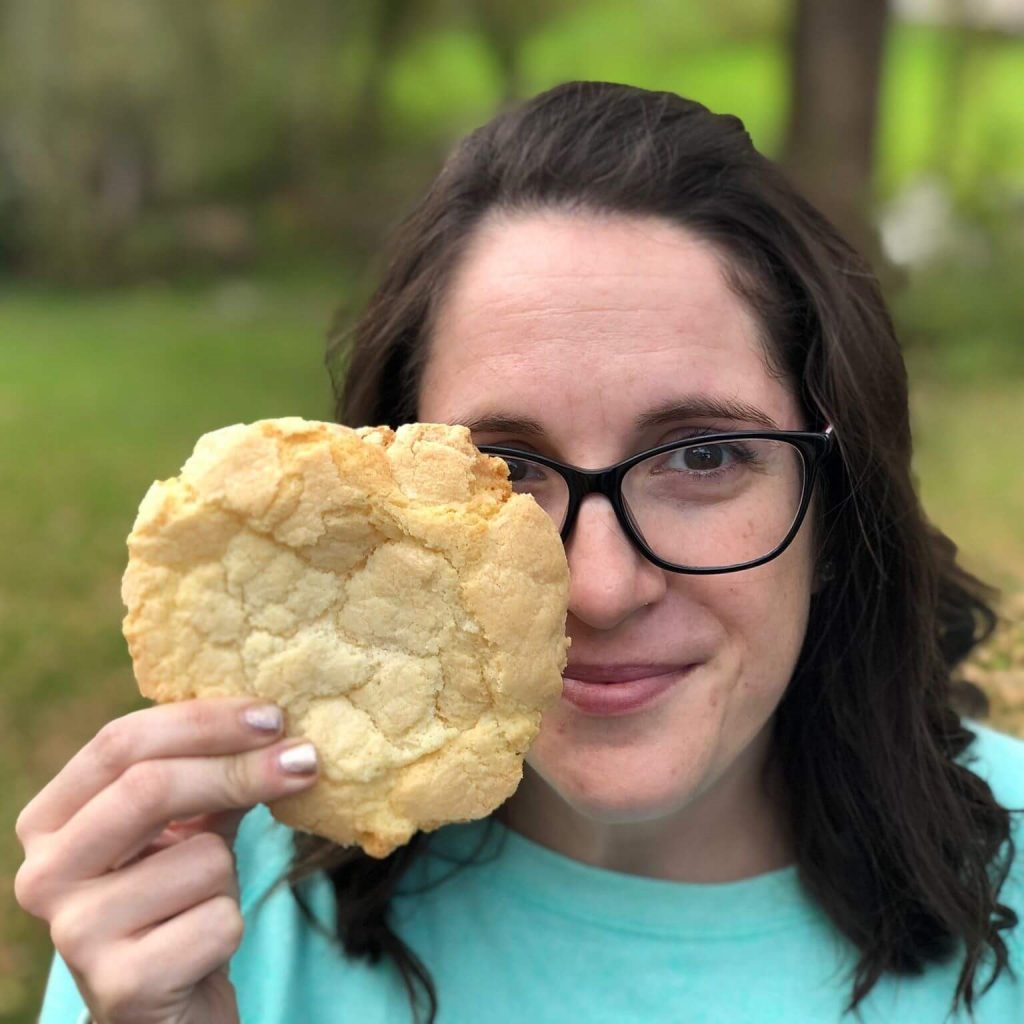 Hi! I’m Sharon and I'm so happy you are here! I’m a graduate student pursuing a Masters in Nutrition and Dietetics with credentials to become a Registered Dietitian. Welcome to The Helpful GF where I share my family’s gluten-free journey with you. ♥